35. That’s a full 5 weeks on this diet. I still have awhile to go before I even reach the halfway point, but every time I put up a new number it kind of surprises me that I made it that long.

Lack of sleep caught up to me this afternoon… I just passed out for 3 or 4 hours and won’t up maybe 30 minutes ago and realized I needed to take Akima out for a walk… and also write this post. If it had just been the latter, I probably would have just stayed in bed and done 2 posts tomorrow (one in the morning, one in the evening) – because really, I’d rather have stayed asleep. I fear I may have screwed up my sleep cycle a bit.

Because I was so tired when I was writing my post yesterday, I skipped over a couple things I had intended to write down. One of them occurred just before the end of my run. In the very final stretch of my run, I got a driveby “Run, Forrest, run!”. Now, I typically assume anyone yelling things out of their car at runners is probably a teenager… and so, I feel a bit confused about it. I mean, this is a movie that came out in the early 90’s, and we have some kid who maybe wasn’t even alive then quoting it at a runner? I mean, I appreciated it and all, but I’m not sure I’m really deserving… Forrest ran much further than I did. Plus he had a longer beard than I do presently… and was in better shape. But hey, it’s something to aspire to. 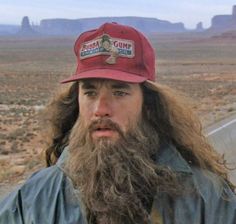 The other thing happened a few minutes later as I was walking back to my apartment. Some group of girls was crossing paths with me (keep in mind that this is ~10PM on Market Street – in case you aren’t familiar, there’s plenty of bars and the like – So I’m assuming they had been drinking). One of them addressed me and said that they were going to call me “Patrick” from now on. I really didn’t know how to respond to being told such a thing by someone I am fairly certain I’ve never seen in my life. In hindsight, I kind of wish that I had asked why. But, in the split second of opportunity I had, I just said something like “Oh, ok. That works I guess.” So now I just have to wonder what inspired that comment – and why someone would want to call me Patrick.