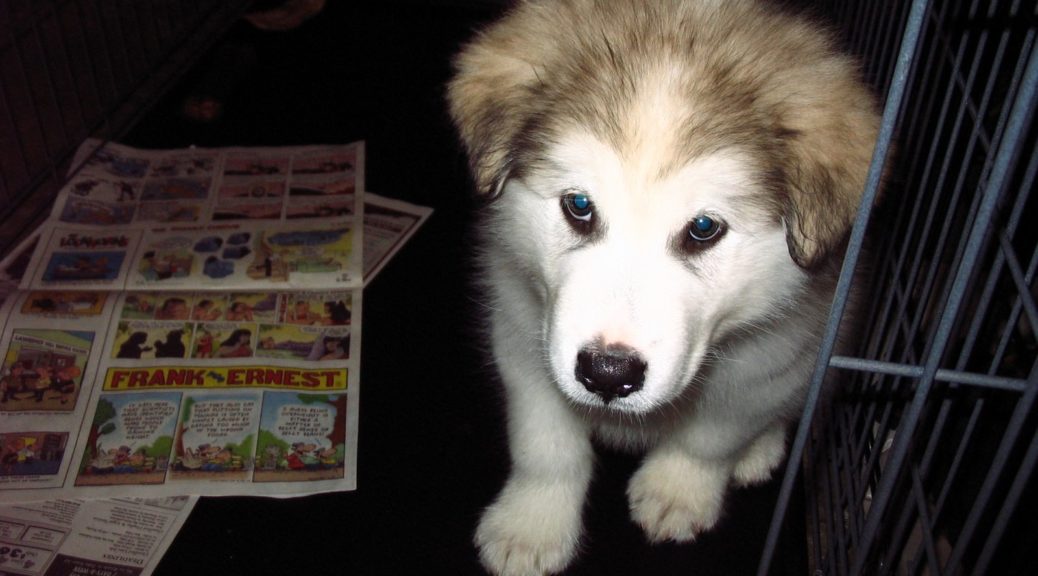 Earlier today, I said goodbye to a good friend. Back in May of 2008 I drove out to the northwestern part of Ohio to pick up Malcolm, a ~2 month old Alaskan Malamute puppy.

It was a very different time in my life as compared to now. I was accompanied on that trip by my then wife. I don’t remember a lot of the details of the trip, but I know it was a long day (we drove out and back in a single day) and that it was the first time I used a newly acquired GPS (this was before they were in every phone – prior to that it was MapQuest). The lady we bought him from was very kind and helpful, and she introduced us to his parents while we were there.

On the way back home, we had to stop in Breezewood because Malcolm had peed on her. She got cleaned up and we managed to get back before too late in the evening. He met my parents’ dog, Jean Claude, who he was already bigger then, but Jean Claude scared him so badly he peed then too. But the two of them came to be good friends – and it was kind of funny to watch them pal around together given the disparity in their sizes.

Malcolm has been there through a lot of stages of my life, including the hardest one, when the divorce happened. In terms of its life-altering nature and the emotional pain involved, it still ranks at #1 for me. But Malcolm was there to keep me company, and for me to talk to, even if he couldn’t talk back. He was a great dog, and a good friend.

I moved away for a time, first to NZ for a year, and then to Los Angeles for a few years. I didn’t want to leave him behind, but I knew I couldn’t bring him with me those places. At the time when I was going to NZ I thought I might be saying goodbye forever, but thankfully my parents decided to keep him there. If not by the time I got back from NZ, certainly by the time I moved back for LA, Malcolm had been solidified as my Mom’s dog, but he never stopped being my buddy.

He had a really strong will. Back when he was crated, he used to be able to escape from it all the time, often just by forcing himself through what seemed to be an impossibly small space. He’d do the same to get out of the fence and go on adventures through the neighborhood. I remember many times going after him trying to get him back home. The frequency diminished, but he never really gave up on that. Even just a few months ago with his bad leg he got out, and unfortunately got stuck back in a creek – fortunately he was found and brought back in. It would be the last time he got out, but really only because he wasn’t let out in the yard by himself anymore. I’m sure he wanted to go exploring just as badly.

It’s not been that long since I had to say goodbye to a dog. There are a lot of similar feelings, but, there’s a lot that is different as well. Yuna was just a puppy – it was such an unexpected thing to happen. I didn’t have anywhere near the volume of memories with her that I have with Malcolm. She wasn’t really there for me through much of anything. But I don’t think it hit me any less hard than this hits me.

The one thing that makes this easier than it otherwise might be is that we knew it was coming. Probably a little more than a year and a half ago, Malcolm was diagnosed with a form of bone cancer. We were told he had maybe 6 months. He made it so much longer than anyone thought, no doubt in part thanks to all the things my Mom did for him to take care of him and keep him in good health. I think the other part was just that he had that strong will. He didn’t let it stop him.

Finally, a few days ago, that strong will stopped being enough, and there weren’t any more options to ward off the effects of the cancer. He wasn’t able to get up or walk anymore, and as it reached the point that he seemed to be both in pain and incapable of living a normal life anymore, my Mom made the decision to take him to the vet to be put to sleep.

I met them over there and sat with Malcolm for the last time. First as he was in the back of the van I whispered into his ear something that I often did: “I love you. Youse a good boy.” After a few minutes we brought him inside.

As much as I miss him and will miss him, knowing the state he was in I know that it was the right decision. My mom and I sat and pet him as he fell asleep from the sedative they gave him. He fought it off a long time, and as they were getting ready to give him the injection, he still woke up again. Even with his body completely broken and in the pain he was in he still kept trying to be there. I sat and held his paw and softly pet him as he breathed his last, and kissed his nose one last time as I stood up to leave.